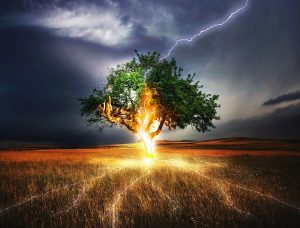 Our everyday lives rely on smartphones, tablets, computers, chargers, routers, TVs, electric coffeemakers, electric toothbrushes and so many other devices that depend on power to operate. Have you given much (or any) thought to protecting them from getting fried?

We’re still in thunderstorm and hurricane season. We get some warning when lightning may be in the area if it’s preceded by thunder. Power surges and spikes happen at any time and without warning. In fact, usually we’re not even aware when they occur.

You should have a strong surge protector to absorb power surges and spikes. It’s your first line of defense to protect your devices and data. Here are some power-ful tips.

Maybe you’re telling yourself it’s never been a problem or you don’t want to bother.

To a patient complaining about having to floss, the dentist replied, “Just floss the teeth you want to keep.” In other words, just protect the devices and data you want to save!

© 2004 - 2023 | An Organized Approach – THE approach for organizing success | All rights reserved.
MENUMENU
Back To Top